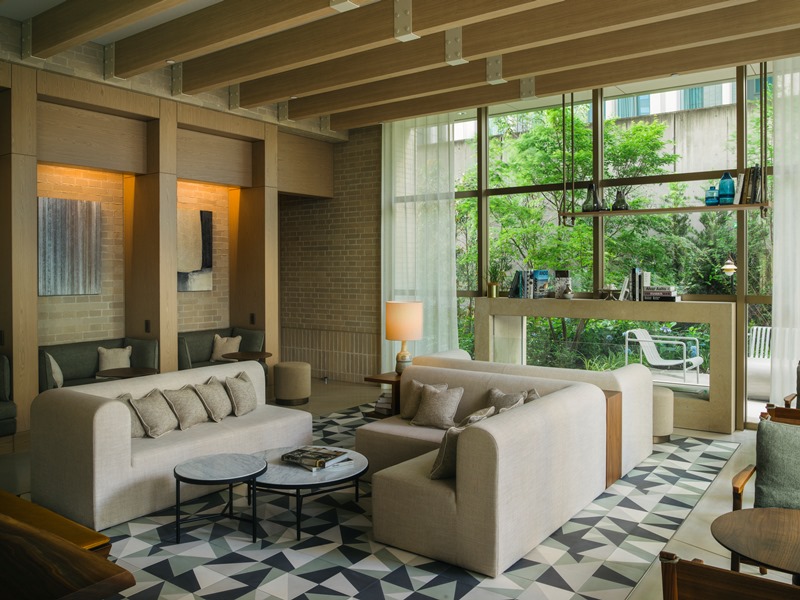 OSAKA (July 15, 2020) – Zentis Osaka, the first of a new hotel brand with designs on raising the bar on select-service hospitality, opens today in the bustling port city of Osaka.

The new, 16-storey build features interior architecture and design by internationally renowned UK designer Tara Bernerd of Tara Bernerd & Partners, a dining concept conceived by a team with a Michelin-star track record, 212 rooms and suites, and a commitment to service that stems from Palace Hotel Tokyo – the homegrown brand that has redefined Japanese hospitality and remains the only independent Japanese-brand hotel to achieve the prestigious Forbes Five-Star rating year on year.

“Our vision for this new brand is to offer the kind of aesthetic appeal cultivated by leading hotels, masterfully paired with services that cater especially well to the essential needs of savvy, independent travelers,” said Daisuke Yoshihara, president of Palace Hotel Co., Ltd. “Getting this balance right presents a real opportunity and we believe we have something truly fresh and new to offer.”

With that approach in mind, Zentis has embraced the Japanese aptitude for space utilization, opting for more sustainable dimensions when it comes to its accommodations – which range from 25-square-meter (270-square-foot) Studio rooms to 57-square-meter (615-square-foot) Suites. In deference to simplicity and sensibility, each guestroom’s layout draws inspiration from the modular design of Japanese bento boxes, giving way to clearly defined sections that seamlessly fit together for optimum flow and functionality.

The fresh palette throughout includes the warm, natural shades of light woods paired with pops of color, while brush strokes inspired by the artfulness of Japanese calligraphy draw attention above each bed and add a local touch to each guestroom. The suites, both situated on the topmost floor, feature entirely separate living and sleeping spaces as well as a cozy dining area. Entry-level Studios are furnished with king-size beds and come outfitted with 4K TVs (equipped with Apple TV 4K), rain showers and plush bath linens from Imabari while each Suite and Corner Studio also come with a soaking tub and can be combined with an adjoining Studio to create a two-bedroom unit.

The hotel’s contemporary interiors embrace both Osaka’s urban landscape and industrial heritage, paying homage to a city known for its boisterous charm. A central staircase carved out of blue limestone makes a design statement immediately upon arrival with its sculptural asymmetry – ingeniously incorporating a bench, a counter and shelves on three of its sides. Nature’s calm color palette extends throughout the public spaces, with soft, warm tones and textures intermingling with timber beams, exposed brickwork and structural ironmongery to give a distinctive, industrial-chic look and feel to them.

With the hotel set in a garden of its own, the feeling of being in an urban oasis is further accentuated by the interplay between the interiors and the green space beyond through the incorporation of a double-sided fireplace in the lobby as well as floor-to-ceiling windows in the public spaces. Contemporary art produced on traditional Japanese washi paper adds another layer of design in the lobby-level lounge that is exclusive to guests and also at the bar one floor above.

Envisaged with the design-conscious traveler in mind, the new property holds a coveted spot as a member of Design Hotels™ – a curated selection of independent hotels with a passion for genuine hospitality, cultural authenticity, thought-provoking design and architecture. The addition of Zentis Osaka to its portfolio reflects the collective’s debut in Japan’s third largest city.

UPSTAIRZ, the hotel’s all-day dining venue, commands much of the second floor and is shaping up as a new foodie destination in the city already famous for its culinary culture. The 116-seat, 250-square-meter (2,690-square-foot) eatery encompasses a main dining room with open kitchen, a lounge for light nibbles and afternoon tea, a covered outdoor terrace, and a bar serving everything from seasonal cocktails to fine Japanese whiskies.

Executive Chef Shinya Otsuchihashi, who has conceived all of the menus, honed his skills in both France and Japan before taking the helm at the Michelin-starred CRAFTALE restaurant in Tokyo, which remains as his base. UPSTAIRZ’s fare draws inspiration from Japanese and French cuisine and focuses on local, seasonal ingredients.

Also located on the hotel’s second floor is the fitness center, outfitted with Life Fitness equipment and accessible to guests 24 hours a day.

Zentis Osaka is situated where the picturesque, riverside area of Dojimahama and the high-end business entertainment district of Kita-shinchi meet. Nakanoshima, an islet that’s home to some of the city’s premium attractions – including the Osaka Science Museum and the National Museum of Art, Osaka – is a leisurely three-minute stroll from the hotel while Osaka Station, the city’s main rail hub, is a mere five-minute taxi ride away. The two major airports that service Osaka – Kansai International Airport and Itami Airport (Osaka International Airport) – are located less than an hour’s drive away.